A group of residents from The Knolls recently attended a musical performance at the historic and scenic U.S. Military Academy at West Point, in nearby Orange County. The residents enjoyed breathtaking landscapes and vistas while en route to the world-renowned military compound which overlooks the Hudson River.

The performance included concertos for violin and cello, a special guest female soloist staff sergeant, as well as a piano concerto originally commissioned by Prince Phillip for Queen Elizabeth. Wind ensemble favorites and military marches were also part of the repertoire. Established in 1817, the West Point Band is the Army’s oldest musical organization.

The Knolls residents shared their enthusiasm and appreciation for the performance. “The band chorus was magnificent,” Joan O. said. “It was so patriotic.” Likewise, Judy G. and her husband Paul, a former musician, were also impressed with the musicianship. All agreed it was a wonderful performance. 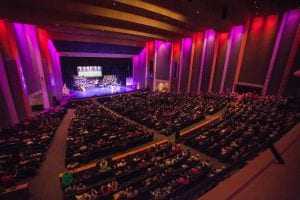 An ideal scenic destination…and local, too!

Joan’s favorite part of the trip was taking in the view while traveling along the historic Hudson River. “The sun shone so beautifully that day,” Joan said. “You could see Bear Mountain on the west side, and boats up and down the river. The view was extraordinary.”

The stunning scenery of the Hudson Valley exemplifies one of the many perks of choosing a retirement community in Westchester, a unique and culturally-rich area. Judy and Paul have fond memories of traveling throughout the state, and the Hudson Valley, while on their honeymoon many years ago. “New York is unique in its own way. It can hold a candle to any state,” Judy said.

A piece of history in The Knolls’ “backyard”

Of great historic importance, the U.S. Military Academy at West Point is the oldest continuously occupied military post in the U.S. It is also known as the post which General Benedict Arnold tried, unsuccessfully, to turn over to the British as part of his infamous act of treason.

The unparalled scenery, outstanding musical performance and historic significance, resulted in this trip to the U.S. Military Academy at West Point evoking a special sentiment for Joan. “I feel lucky to live in this beautiful nation,” she said.

Such memory-making trips and experiences are a part of life for residents at The Knolls, thanks to the community’s great location and cultural arts program.

Learn more about how The Knolls can be the hub for your ideal active retirement lifestyle. Simply click here or call 914-461-4517 to get in touch today!